Falcon is a new generation F3K glider developed by Nikolay Gorban from High Quality in cooperation with Oleg Golovidov. It’s produced in Ukraine using CNC-machined molds and a combination of spread carbon and solid foam core. All the surfaces pass the quality tests and get polished to shine under the sun on the field before shipping.

The design of this glider is inspired by flying XX-Lite and NXT and combines their best flying characteristics of both. It offers an unbeatable launch performance, wide speed range and an ability to float in the lightest thermals.

Falcon features the fuze designed to fit all 4 servos in the pod which results in the slimmer wing airfoil and optimal construction. The ballast tunnel on the bottom of the fuze can add weight to the model for better performance in the windy conditions. The aileron horns are placed externally but the fuze is shaped specifically to reduce the drag and allow for easy aileron pushrods access simultaneously.

Be the first to review “Falcon F3K” Cancel reply 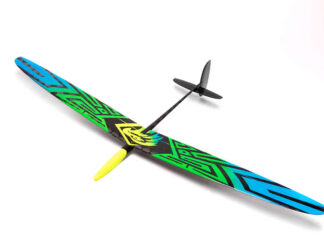