FREE INTERNATIONAL SHIPPING FOR ALL ORDERS 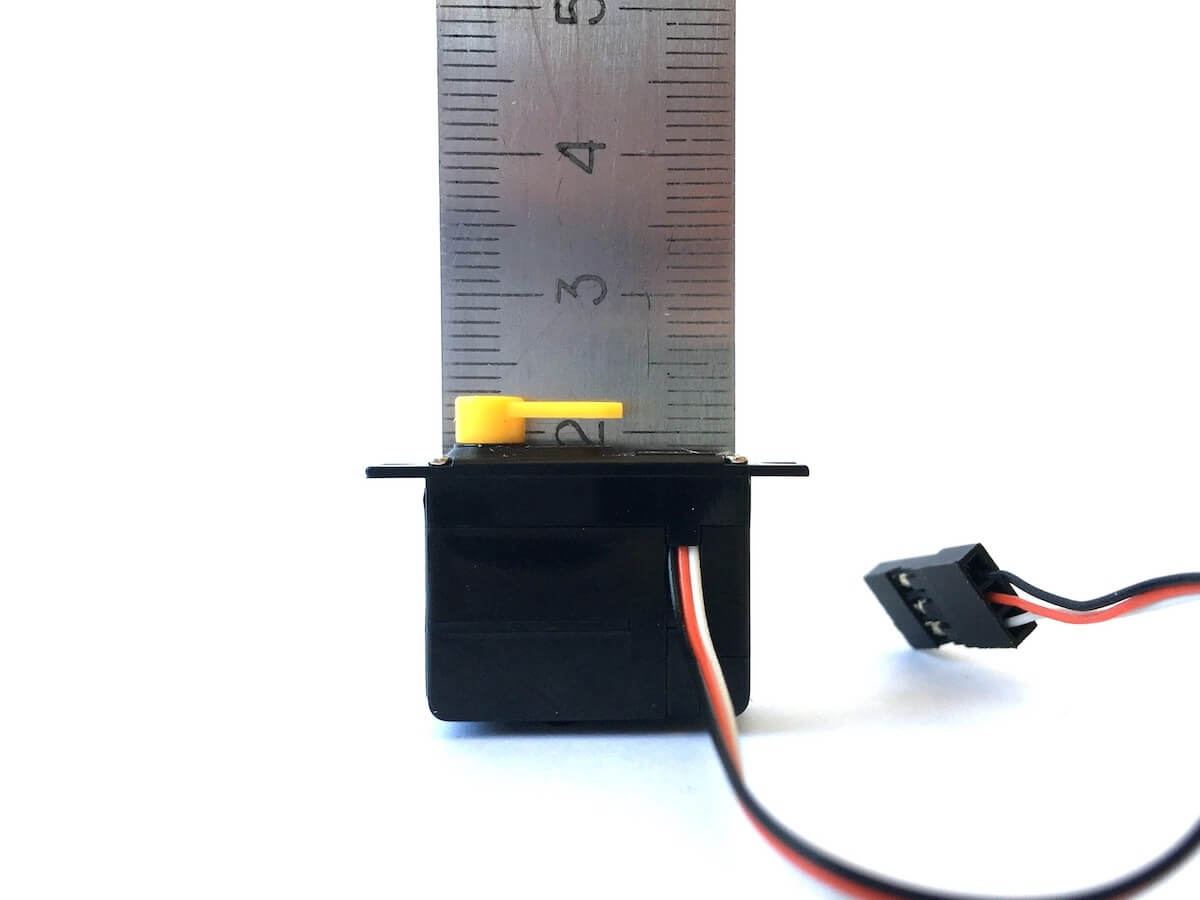 What makes a micro servo to become the best DLG servo?

I bet everyone has their own take on it and there is a bunch of choices in the various price range.

But is there the single best servo for a DLG?

A rule of thumb for full-size F3K models is definitely KST X08 V5.

Are there any alternatives?

What about choices for 1-meter F3K-Mini models?

Looking For The Best Micro Servos

As mentioned above, the best micro servo choice for 1.5-meter F3K gliders are KST X08 as well as MKS DS65K / DS75K. Their price tag starts drifts around $50, give or take.

Well, this price can be considered for competition planes, when you need that reliability and precision to equip a pricey model and crash the scores.

But what if you are looking for a weekend flyer?

Do you really need to through that much money into servos?

What you’d consider the best micro servo in different circumstances?

Or if you are flying a 1-meter DLG where the price of the servos mentioned above may exceed the value of the entire model?

There are some great alternatives on the market, but usually, you have to crawl RC Groups threads to figure out what to use for your particular DLG setup.

That’s why in this article, I’ve decided to put all these together, doing the dirty work for you.

Learn the data, watch the test videos and you’ll be equipped to identify the best micro servo that will fit your needs

We would not explain the difference between the two, you can find a tone of information on this topic around the web.

Analog servos are less precise compared to digitals, but also making the work done in a great way. They are usually cheaper and more energy-efficient.

Considering that we are talking DLGs – RC gliders, that have to be light and feature the best aerodynamic characteristics, most pilots care a lot about the size of the batteries inside.

So, why do most DLG pilots use Digital servos while building their gliders, say KST X08?

Because they are very light, strong and precise and a 300mAh or 450mah 1S LiPo battery will drive 4 of these throughout a whole round in a competition.

Such batteries are already very light and there is no need to give up the performance of a digital servo to the better energy efficiency of an analog one.

For a new round, they swap it to a fresh, fully charged one and continue.

So for the competition flying, yeah, go digital.

On the opposite, analog servos are simply cheaper.

If you are building a 1-meter balsa DLG from a $90 KIT, that’s insane to invest $120+ into a reliable metal gear digital servo…

So you can go with some budget analog servos that will bring you an enormous amount of hours in the air with your favourite glider.

Why is this happening?

These two are being built by different vendors which create room for such anomalies.

If we’d look at a servo lineup of a single vendor, the analog servos are usually the cheapest option you can get.

The build quality of the entire model, not the servo itself, can influence the model performance massively.

A purely built control horn or servo linkage along with the sloppy pushrods can ruin all the benefits of the most accurate and durable servos.

This is the main reason why RC models and RC Gliders, in particular, can provide an unbeatable performance with the basic budget servos. If they were built nicely and are in the hands of an experienced pilot.

So, getting back to the DLG servo choices.

Now, check the tests we performed, learn about the other servos that you have available and choose the ones that fit your needs best of all.

For your convenience, we’ve put together some tests to help you find the best micro servo you can use in a DLG.

To make it informative, we’ll use the same equipment for all tests:

A lot of pilots nowadays go with the 1S LiPo for their DLG setup and have questions if a particular servo will work on 3.7v.

While manufacturers often don’t specify if the servo is working on a single LiPo cell, we’ll test it out even if it’s not confirmed.

In addition, you’ll find the total height with the servo horn, as sometimes this data is missing on the product descriptions.

For example, the total servo height is critical when choosing equipment for a glider like Hawk or IAGO.

So let’s check some data.

D47 is probably the only servo out there that is widely used with both 1- and 1.5-meter (for tail controls) DLGs and has brilliant reviews all over the place.

We decided to start with it to set up the baseline of the great in all senses DLG servo.

It has a lot of substitutes which may be named as follows:

Pilots like its precision, high quality of materials, durability, and relatively low price point considering its readability, so a lot of 1-meter models use a set of four D47 servos to control all the surfaces.

For the full-size F3K models, these servos are often used to control tail surfaces.

They have a low height with the servo horn installed which makes them a great addition to the Elf and Hawk DLGs as they fit in the fuse with ease.

These servos have a great centring and work smooth powered with a 1S LiPo bat.

Considering that we need some benchmark, KST servos should exist in this test as well.

It supports high voltage of 2S LiPo directly, so seems to be slightly slow on 1S LiPo, however, it centres precisely no matter what.

Thanks to its performance on single-cell LiPo this one is usually used for the full-size (1.5-meter wingspan) DLG models actuating all 4 control surfaces.

Great choice if you are up to paying the price as it totally worth every penny.

HS-40 is another small analog servo that has similar specs to the previously mentioned D47.

The exterior is a little different, but the overall height with the servo horn is only 1mm bigger than for D47.

I stumbled upon Hitec HS-40 while assembling VM’s Elf.

D47 are the recommended ones for this model, but they were out of stock in my local shops and I needed a substitute.

Hitec ended up to be a great replacement and fit under a tiny Elf’s nose with ease.

Later I used 4 of these in Hawk DLG as well, and they are performing brilliantly. You can notice that one of the ailerons is a little slow while switching between the flight modes, but considering the price of these servos, you can get away with it.

In addition, it centres great and is a fraction faster on 1S LiPo than D47.

It’s a little taller than the other 2 above and that’s why it may not fit the fuse of 1-meter DLG models.

However, some people managed to use them with the partially removed outer case on the 1-meter models as well.

I.e. you can take off the bottom part and shrink wrap the servo before installing it.

They seem to be slightly slow on 1S LiPo as it’s a standard voltage version but still makes the job done.

Emax ES 9051 ended up being a great tiny servo, which is a little too tall for some 1-meter DLGs but still can be a great “driver”.

It has plastic gear, same as HS-40 and D47 while being well cheaper.

The speed on a single LiPo cell is excellent, so is the centring.

As an example, take a look at how Emax ES9051 servos perform on a Malibu DLG, especially the precise movement from speed mode to the cruise mode.

They are tiny enough to fit in the nose of the Hawk or IAGO 1-meters, however, only w/o the lower part of the plastic housing.

Power HD is a brand with an established name in the RC industry with a huge fan base.

So it’s not a surprise, that they have some options to offer for DLG pilots as well.

PowerHD DSM44 is the smallest servo in the company’s digital servo range which weighs only about 6g.

Additionally, it features an aluminium gear and works in a standard voltage range making it compatible with 1S LiPo batteries directly.

Unfortunately, these can’t be used with 2S Lipo directly.

We tested it with our 1S LiPo setup and it turned out to be a great value for money – it is faster than KST X08 V5 while pulling around the same torque with great centring and having very similar dimensions.

While the average price is only a quarter the KST, it will make it for a great budget servo even for 1.5-meter models.

KST X06 is a recently (2021) released micro servo by a well-known brand in the DLG space. And considering the success of the KST X08 servo, we were excited to test this little rookie.

It ended up being a great little servo for a DLG or any other small model where you need power and reliability packed into a compact size.

Thanks to its features it became a #1 servo recommendation for Iago DLG as the pod size is quite small there. Ofc, it will make a great fit for Hawk DLG as well.

The speed of KST X06 was remarkable, considering that it was running on a single cell LiPo during the test. Worth mentioning that it is capable of a high voltage as well (8.4V).

In addition, it features an aluminium case and a coreless motor for the best reliability scores.

Considering that we used an enlarged ~12cm arm, it revealed an occasional double-centring of the testing unit. However, the other servos we tested the other day was centring great.

Overall, we highly recommend KST X06 servos for DLGs of any size.

Also, if you’d like to get a Hawk or Iago DLG or Falcon F5K built up with these servos, just drop us a line!

Here is a list of other servos which seem to work great on DLG models but we haven’t run any tests with them.

Did we miss anything? If you have some other suggestions, please, leave them in the comments below.

Keep In Touch
New From A Blog