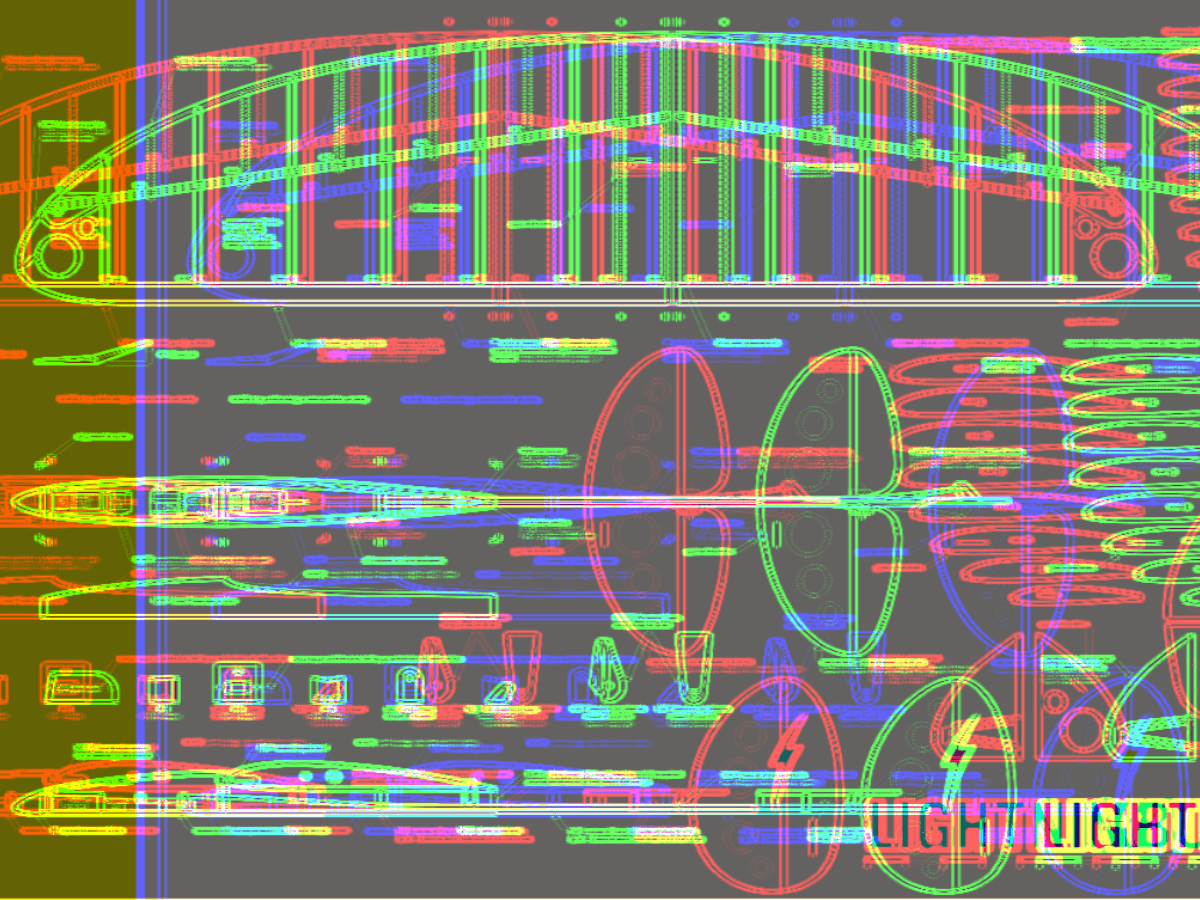 DLGs or discuss launch gliders, gained a lot of popularity lately, for the size and performance they offer.

However, the combination of features modern DLG gliders have raises the price tag up to $1000 for a 1.5-meter model… and ofc, manufacturers keep their DLG glider plans private.

Luckily, there are a few sources around the web, where we can find some detailed DLG plans which are publicly available. Additionally, there is plenty of info on the building and tuning of these models.

The main “issue” with the built-up DLGs is the lack of stiffness, compared to the molded carbon models.

Discuss launch gliders mean to be launched by a pilot holding the glider by the wingtip, spinning around to create momentum, and releasing the model at the end of a spin.

This type of launch applies extreme linear and torsional forces to literally all the parts of the glider and raises the bar for the build quality and construction.

So, that’s why most of the recent DLG gliders at the F3K competitions are full carbon, pressed in molds. There are some bagged models as well, but they are becoming rare guests at the competitions as time goes.

You can find some free DLG glider plans available online though. They will give you a chance to start and everyone at the local field will welcome you with the balsa DLG to join the competition.

But if you wish to perform on a good level against the others, once you get some flying practice, the bagged or molded 1.5-meter wingspan DLG will be a must.

1-meter models might be using balsa as the main building material as on the smaller wingspan you can manage to build a relatively stiff model that will survive up to 40-meters launches.

So, if you are looking for the balsa build, I’d recommend going with the 1-meter DLG.

If you are willing to build a 1.5-meter, consider making a composite wing in order to have a decent model.

Also, if you don’t have not a lot of experience with composites, or just prefer to buy a ready-made kit, check out the Hawk, Iago, and Falcon.

All these can be purchased as Kits, so you will still have to do some assembly and install the control horns, pushrods, pull cables, servos, etc.

Another benefit of the modern DLGs is the airfoil accuracy compared to the built-up gliders. This has a direct influence on the performance of the wing and a whole glider as a result.

Additionally, if you compare the price of your potential build and a kit – in some cases, the difference is very minor.

But buying a DLG kit will save you a lot of time and will provide the best performance, compared to the home builds.

Now, back to the plans.

These usually use balsa and carbon tubes which you can easily source from a local hobby store.

We’ll be looking at the balsa constructions mostly.

These are easy to build, use widely available materials, mostly use only rudder and elevator for steering, and perform great overall.

So let’s dive in!

The Bug is a glider that hooked up a lot of pilots around the world to start flying DLGs.

This is actually a Mosquito-Class glider so the wingspan is only 0.75-meters.

It was designed back in the ’00s as an HLG with a V-Tail and modified for the discuss launch after. It features a wide oval wing that maximizes the wing area at and handling performance.

There are no ailerons but with the dihedral of the wing, it steers greatly with the Rudder and Elevator. Additionally, it needs only 2 servos that lower the value of the gears that you use for this glider.

The original plan from the ’00s is available on Outerzone.

However, considering that it was designed for “javelin launch” (HLG) instead of the discus launch (DLG), I’d recommend looking at the updated model called The Lightning Bug.

It features a better wing construction which is more optimized for discus launch and also has an option for using AG37 airfoil instead of Selig 3014 used in the original model.

The AG37 is thinner that positively affects the launch height and was specially designed by Mark Drella for build-up glider wings w/o ailerons or flaps.

The new plan is also available from Outerzone.

Additionally, there is a great thread about The Bug and The Lightning Bug on RCGroups where you can find a lot of build and gear selection tips and get answers to the questions you may have.

Now, let move on to the next candidate – The Apogee.

This glider was designed by Mark Drella and was a predecessor of the famous Elf DLG provided by Vladimir’s Model.

The plans are available online and have variations for built-up and solid-sanded balsa wing, composite wing as well as for the wingspan, starting from 75cm and up to 1-meter.

It uses the previously mentioned AG-Family airfoils designed specifically for the HLGs and DLGs.

Moreover, each plan has its own build tricks on how to get the right shape that will be the closest to the desired airfoil. I.e. you can send a solid balsa or foam block flat and get the shape you need.

Also, there are a few variations of the fuse for composite and balsa lovers.

So, literally, everyone will find an option that fits their flying style.

Apogee performs great, and also comes with V-tail by default as seen on the plan.

However, you can easily tweak it and copy the style on the Elf’s tails or check RCGroups on the build tips. There are a bunch of different build logs, including some Apogee-inspired kits.

The third option in our lineup is The Mimi – a one-meter balsa DLG that can have an option for a ribbed or solid-shaped wing.

There are no plans available online, however, you can email or DM a RCGroups user according to the instructions in the dedicated thread and get a copy of the plan to your email.

It is a classic construction with a dihedral wing, 2-channel steering with rudder and elevator.

The build process is very easy and all the materials needed you can source from a local hobby store or your hobby mates.

Mimi comes out to be a great model for beginners with some basic building skills.

These gliders are flying all over the world and there is a lot of info on various forums in different languages. So you can easily get some build tips and sometimes help if needed.

Now, if you had enough flying small gliders, feel free to step up to the full-size F3K models.

Worth mentioning that in reality, the 1.5M balsa DLG will be hard competing with the modern molded or bagged models.

They lack of stiffness and the modern airfoils which are optimized for the wide range of speeds and camber/reflex settings are very critical about the front part of the wing.

Because of this, it is hard, while still possible to build a competitive full-size F3K glider from scratch. If you are looking to attend competitions, go for bagged wings as a minimum. Balsa will not let you progress.

However, the plans are there and if you are looking for a next project to be an F3K glider, let’s dive in.

Considering the above, let’s start from a rock-solid glider that you can build even now – a Mark Drella’s Super Gee.

There are 2 versions, and the main difference between the first and second is the RDS servo mod for the latter along with the new set of foils.

Personally, I’d stick to the second version regardless of the servo installation option.

This model will give you a basic understanding of how to make the bagged wing from scratch, as well as many other aspects of building that people use in modern production as well.

Ofc, you can find more recent plans and adapt them, but the Super Gee was one of the basements so, see where it all started.

Back to the beautiful balsa constructions, there is The Manta – a beautifully designed elliptical wing and AG-Family airfoil that allows for the various camber settings… It is unbeatable.

The plans are located in the respective RCGroups thread where you’ll find the build logs and many more.

This glider is looking astonishing, so do it flies.

Give it a try and you won’t be disappointed with the performance.

And last but not least is The QF2.

Same great performance for your buck.

There is also an enormous QF2 thread on RCGroups that counts on 400+ pages at the time I’m writing this.

It is easier to build than The Manta, so now you have some to choose from.

To sum up all the information above, there is a bunch of free DLG glider plans available online so you have a plant of options to choose from.

But, I’d suggest you always count on your time and resources.

The building takes time and requires some space to perform usually some dusty and semi-safe procedures, in case we are talking composites.

And the quality of the first built-up model may be outstanding, and may not…

So, if you are a builder more than a flyer, we combine the most tested and bulletproof DLG glider plans above.

If you are more a flyer, check our selection of DLG Gliders and pick up the one you like the most.

You would be surprised how small the cost difference between the Kit and a Build-Up model could be if you count on everything including the time you will spend building.

Regardless of your choice, enjoy building and flying your RC Gliders and leave a comment below if we are missing something 😉